has something for everybody

My popular Nuremberg WW2 and Old Town Day Tour covers the Rally Grounds to Room 600 in the morning and then the Old Town after lunch. This day tour is a great way to learn about not only the immense proportions of the former nazi party rally grounds and the megalomania of the National Socialist regime but also about Nuremberg's medieval history. It's a really great way to get an overall picture of Nuremberg through the ages.

We will start by visiting the "Luitpold Arena" site, the Congress Hall, The Great Street, and the Zeppelin Field. Afterward, we will drive over to the Justice Palace, where Room 600 is located, and learn about the first serious attempt to adjudicate State leaders accused of war crimes after WW2.

We won't stop there

For lunch, I'll introduce you to Nuremberg's world-famous bratwurst.

After we eat we'll see the Main Market Square and the Beautiful Fountain. Also included are Fleischbrücke, Unschlitthaus, Weinstadel, Kettensteg, Tanners' Alley, Church of St. Sebald, and finally Tiergärtnertorplatz (Albrecht Dürer Haus). We end the tour in front of the New City Hall near the main market square.

It is also possible to customize this tour any way you like. I'll be happy to give you a quote for any tour variation that you want.

For parties of six or less, pick-up and drop-off with my personal vehicle from locations within central Nuremberg are FREE. If your party is larger than six people, please let me know so I can give you a quote for the additional costs involved.

IMPORTANT BOOKING INFORMATION: Please click here to contact me for a quote and to check my availability.

Please note: Room 600 (the courtroom where the trials were held) is still a working courtroom today and, therefore, I can't guarantee that you will be able to actually go into Room 600. However, you can always visit the excellent exhibition upstairs regardless. 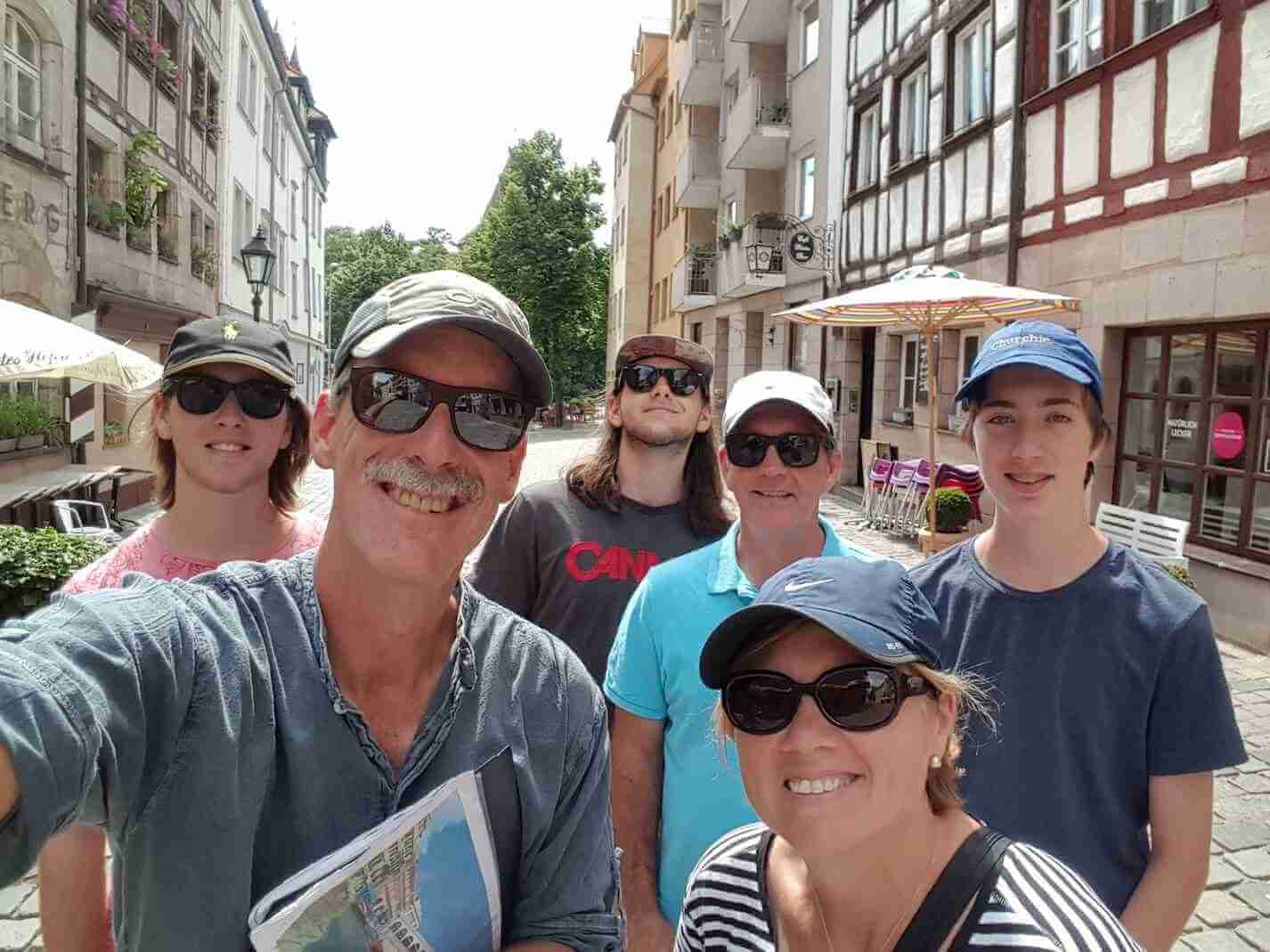 Relaxed yet full of life and passion for his craft, his subject, and his niche, Kevin is 'The Picasso' of tour guiding in Germany. I learned so much about details and points of view, you'll never read in a book, or notice in a photo. It's great to learn from someone who makes a difference in the way we look at life and shows that we should and can learn from history. Thanks for an awesome day Kevin.

The highlight of my entire trip to Germany
♥ ♥ ♥ ♥ ♥
I was in Germany this past October for work and wanted to make the most out of my free weekend - so I booked a tour of Nuremberg with Kevin and I'm happy that I did! This tour was the highlight of my entire trip.
I can't speak more highly of Kevin. I was picked up promptly from my hotel in the morning and shown WW2 sites outside of Old Town.
Kevin really knows his history and you can tell he enjoys sharing the history of Nuremberg with others. Kevin had several photos with him to support how monuments looked in their prime which really helped put things into perspective.
Before continuing the tour of Old Town, we had bratwurst at his favorite spot in town. Man, they were good! I went back the following day to buy more to go.
In Old Town, he showed me where I could pick up some lebkuchen and helped me locate an ATM. I was shown the town wall, explained how they would defend themselves in the event of an attack, and shown the home of the town's executioner. These things I would've completely overlooked had I walked the town myself - I am grateful my tour included this!
Overall, it was such a cool learning experience. You can't go wrong with a private tour with Kevin

Only one day in Nuremberg
♥ ♥ ♥ ♥ ♥
We only had one day in Nuremberg so we decided to do a private tour with Kevin. He picked us up at 9am outside the train station and we were off.
We did a half-day tour not a whole day combo tour to give us time in the afternoon to walk around on our own. Kevin started us off at the Nazi party rally grounds and Zeppelin Field. Kevin was a font of knowledge and information. He was also quite entertaining.
After the rally grounds Kevin took us back to our hotel to drop off our luggage then it was off to the Old Town. We toured around the rest of the morning with Kevin pointing out beautiful and historic sights and giving us information on where we may want to explore (and eat) on our own later in the day.
When we completed the tour we stopped in for lunch at a recommended restaurant and spent the rest of the day exploring; confident we knew our way around the Old Town. It was a wonderful day.
I'm so glad we chose to do this private tour with Kevin. He is also extremely helpful when he understands your travel plans and desires and will suggest something that makes sense for you.
I highly recommend a tour with Kevin for anybody visiting Nuremberg.

KEVIN is the Best Guide and your Best Friend in Nuremberg
♥ ♥ ♥ ♥ ♥
My son and I decided to go on a father/son adventure in Germany years ago but postponed it until the moment was right for both of us and finally decided on his spring break this year.
We’d booked tours through a third-party site and our tour of Nuremberg was canceled by the booking agency, unfortunately, because of its unavailability.
Knowing that Nuremberg is a treasure trove of history and sights I set out on my own to find someone — anybody — who could offer a comprehensive tour of the medieval city and the WWII sights.
A Google search yielded Kevin as an option. He had glowing reviews. I bought the deluxe package, an afternoon in the Old Town, and a morning of WWII areas.
Let me begin the review by saying that very few things that seem too good to be true actually produce good results; so I was a little antsy to experience what Kevin offered. WE WERE NOT DISAPPOINTED.
Kevin is a rare find! In a city with a thousand years of history that deeply impacted world history, you’d think there would be dozens of people offering personalized, curbside interpretive tours.
In our opinion, Kevin is the only game going, and he’s extremely good at what he does. He arrived promptly at our hotel in his Mercedes minivan, alert, engaging, and energetic.
Kevin's interpretation of events, sights, and the overall impact of the people, places, and things contained in Nuremberg were second to none. He makes it interesting, engaging, and will crack a joke at the appropriate moment!
His interpretive skills are some of the most objective and detailed of any I’ve witnessed. His tour of the castle made the cold mass of stone come alive as if we were watching a battle unfold before us.
Standing on the former Nazi parade rally grounds and in the ruinous Congress Hall with him, we learned about the causes and the human side of what turned out to be one of the darkest periods in human history, in a factual and realistic sense. Room 600 and the Hall of Justice are not to be missed!
I’d rate Kevin among the top 10 experiences I’ve had abroad in my 47 years, and I feel lucky to have been able to have such an experience with my son. If you want the most out of your visit to Nuremberg email Kevin and set up a tour!

PLEASE REVIEW THIS TOUR BELOW